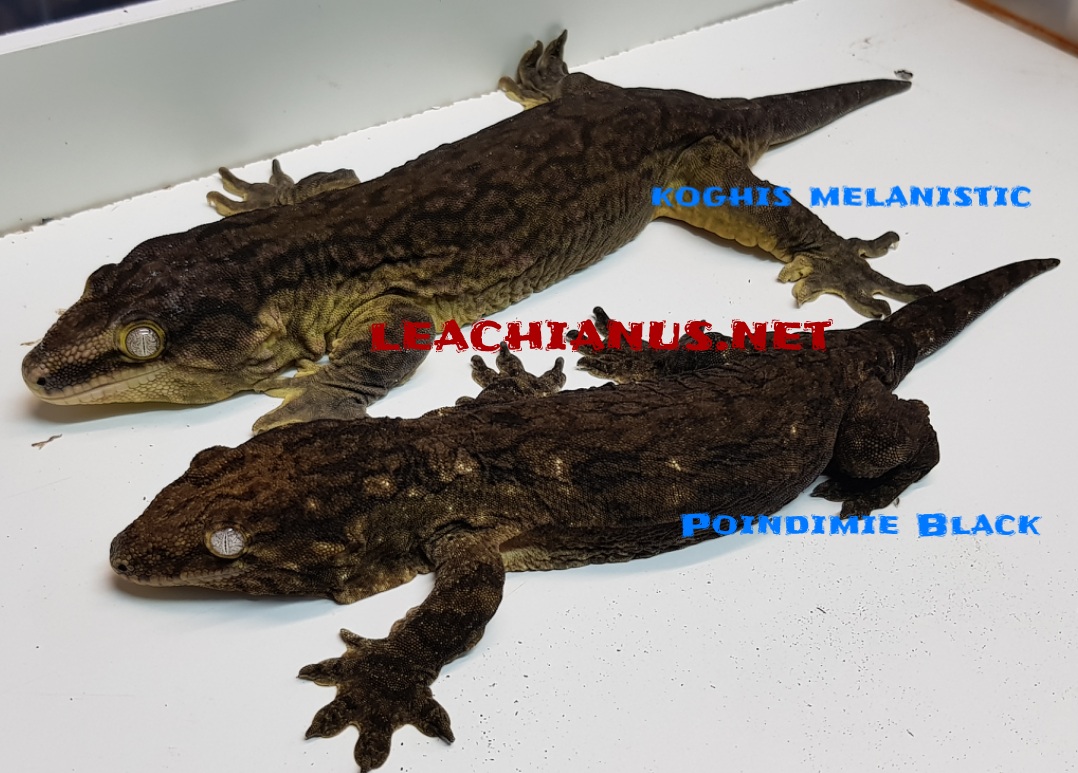 Koghis Melanistic is one of the best looking leachianus available at the moment on the market. Few data are available about these animals, unclear are the origins, unclear is the why they born completely black and unknown is why sometimes from koghis non melanistic hatch a melanistic one.

Here some of my animals that give birth to melanistic ones.

Some FAQ about melanistic genetic.

-What is a Melanistic Leachianus ?

My personal definition of melanistic leachianus (Koghis Friedel line) is a gecko that hatch “jet black” and is visually different from every other “Dark Morph” :  i’ve hatched to date about 30 Poindimie black line and 30 Yate of different lines but they all hatch BLOTCHED, dark, very dark but BLOTCHED. Melanistic don’t. Neither normal Koghis of Friedel or Troeger lines hatch that black.

NO. They are not snakes. Remember that these animals in their country of origin are called “chameleon” (chamaleon) , because they change colours and are so much mimetic.  Melanistic can be fired or unfired too, so they can be very dark if fired to pale grey if unfired.

NO. They still have stripes. These stripes are “dirty white” to “grey”. Here some shots where you can see how does the stripes look like.

-What about mel and het mel hatch % ?

Lot of people ask me about hatch % in melanistic leachianus. Speaking about MelxHet i could tell that we could be near to a 50% while  HetxHet gives 25% melanistic babies. So it seems a recessive Mendelian gene.

Usually het mel are lighter and have white bars. Check the photos below.

Melanistic hatch jet black, and when fired are darker, a lot darker.Here a comparison with a GTmix, a Melanistic and a Henkeli hatchlings (1 day old)

Another character you can see in melanistic animals it the yellow line between eyes and nostrils . Poindimie, Yate, Koghis do not have that yellow line.

-What’s the difference between a melanistic and a dark morph ?

“Dark morph” was a term used to distinguish the two form of Mt. Koghis animals. On Mt. Koghis was found only one very dark animal and one with pattern. So they called the dark one “dark morph”. This term should be used only for the koghis locale, but is not correct too. As soon as only ONE animal was found and next bred probably to a patterned one from the same locality we have all the koghis with pattern. Than Koghis was split in Troeger (less pattern and bigger) and Friedel (more pattern and smaller) .

Today we call “dark morph” any dark animal as a Poindimie or a Yate or cross between them. There are green poindimie lines, golden yate lines , so everything is a “dark morph” to describe his dark colour.

Here the difference between a Yate (dark morph, the darkest i’ve ever hatched) and a melanistic hatchlings.

-What is the ontogenesis (the change of colour from hatch to adulth) of the melanistic ?

As for the other leachianus, melanistic change colours three times during life. First they hatch black, very black, and keep the colour one-two months.

Then, around 40 grams and 3-4 month they change and get a pale colour, not so dark and not so beautiful. Compared to an adult they seems another animal.

But when they reach adulthood they become darker again.

-What about melanistic “colour” lines ?

Melanistic animals DO HAVE bars, and sometimes they are coloured. Really do not know how but instead of white bars can appear reddish-purplish bars.